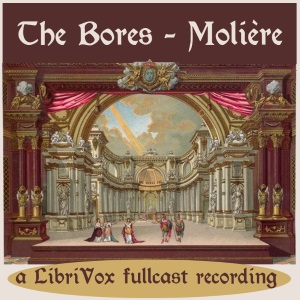 LibriVox recording of The Bores by Molière.
Read in English by ToddHW; Son of the Exiles; April Walters; Sandra Schmit; Leanne Yau; Tomas Peter; TJ Burns; alanmapstone; Sonia; Eva Davis; Nemo; Roger Melin; Chuck Williamson; Rob Marland; Larry Wilson; Joseph Tabler; gawoozle
Moliere: "Never was any Dramatic performance so hurried as this; and it is a thing, I believe, quite new, to have a comedy planned, finished, got up, and played in a fortnight. I do not say this to boast of an impromptu, or to pretend to any reputation on that account: but only to prevent certain people, who might object that I have not introduced here all the species of Bores who are to be found. I know that the number of them is great, both at the Court and in the City, and that, without episodes, I might have composed a comedy of five acts and still have had matter to spare."

So with that, who needs a plot? - Summary by ToddHW